Rhinoplasty, or nose reshaping is one of the most common of all plastic surgery procedures.

A lot of people are unhappy with the size and/or shape of their nose. The nose is central to facial balance and many people opt for surgical nose reshaping, or rhinoplasty, in an effort to find a more harmonious alignment of their features. Sometimes the problem can be more to do with the position of the chin or jaw, but patients tend to focus their dissatisfaction on the nose.

The most important thing is that there is clear communication between a patient and a surgeon about what is wanted and what is achievable.

Nose operations are most commonly carried out to:

What are the most common reasons for people wanting nose operations?

What surgery is available, and what techniques are involved? 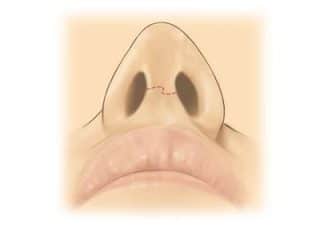 A nose reshaping operation is either performed from inside the nostrils-  this is referred to as a closed rhinoplasty; or else by making a small cut on the nose and elevating the skin – known as an open rhinoplasty

The precise nature of the operation will vary depending on the area of the nose that is being treated.

If the bridge of the nose is being operated on, the surgeon removes the bone and cartilage that is causing ‘the hump’. The nose may then be broken to allow the remaining pieces of bone to be moved closer together, resulting in the narrowing of the nose.

When the tip of the nose is operated on, the cartilage that makes up the tip-support needs to be partly removed or reshaped. This is done through the nostril, or by making a small cut in the bit between the nostrils (known as the columella) in an open rhinoplasty.

A surgeon can adjust and reduce the central structure of the nose, known as the septum, to help shrink the tip and reduce the overall length of the nose. Adjustment to the tip cartilages also helps adjust nasal length.

By breaking and repositioning the side nasal bone, a surgeon can also reduce the width of the nose and achieve a narrower appearance.

The above techniques can also be used to straighten and refine a nose that has been broken through injury, and to relieve breathing difficulties.

Who will I see as a patient?

Rhinoplasty operations are conducted by one surgeon with the help of an assistant. Prior to an operation, however, careful examinations will be carried out to determine whether surgery is the right course of action and confirm what can be achieved.

What should I expect in terms of treatment, procedures and outcomes?

Make sure you talk to your plastic surgeon and are 100% sure before the procedure.